Dua to read for Muslim kids, males and females which our Beloved Holy Prophet (PBUH) used to recite at morning time after Fajr Namaz in daily routine.

Morning Dua with English Meaning:The morning has come to me and the whole universe belongs to Allah, the Lord of the worlds, O Allah, I ask of you the good of the day, it’s success and aid and it’s nur (celestial light) and barakaat (blessings) and seek hidayah (guidance) and seek refuge from the evil in it (this day) and from the evil of that which is to come later.
(Hisn from Abu Dawood)

Morning Prayer in English Translation:O Allah we enter the day time and the evening and die with your Qudrat (power) and to You do we return.
(Tirmidhi)

Hazrat Uthman (R.A.) reported that Holy Prophet Muhammad (PBUH) has said that nothing (noxious reptiles, animal or jinnat, will harm the servant who recites these words three times in the morning and evening time everyday.

Morning Dhikr with Meaning in English: We have made (started) the morning (and night) in whose Name nothing in the skies and the earth can harm and He is the All-hearing, the All-knowing.

There are great virtues and benefits of reciting Ayat ul Kursi in Morning, evening time, after fard namz or when you leave your home.

Hadith No:1 for Ayatul Kursi
It was narrated that Abu Umamah said: The Messenger of Allah (peace and blessings be upon him) said: “Whoever recites Ayat Al-Kursi immediately after each prescribed Prayer, there will be nothing standing between him and his entering Paradise except death.” (Reported by An-Nasa’i and Ibn Hibban.)

Hadith No:2 for Ayatul Kursi
Hadhrat Ali (ra) says that the chief of the Ayats of the Quan Majeed is Ayatul Kursi.

Hadith No:3 for Ayatul Kursi
Hadhrat Ibn Masood (ra) says that no space in the sky or on the earth is loftier than Ayatul Kursi.

Hadith No:4 for Ayatul Kursi

Hadhrat Ali bin Kaab (ra) remarks that Nabi (saw) asked him,” Which is the most high ranking Aayat in the Qur’aan Kareem?” He said, ” Allaah and His Rasul know best”. Rasulallah repeated this statement very often. Hadhrat Ali (ra) stated, “Ayatul Kursi”. Nabi (saw) said:”Oh Abul Munzar (family name of Abi bin Kaab). May you be blessed by this knowledge. I swear by that Being in whose Hands and Control is my life, that this Ayat has one tongue and two lips. It is by the threshold of Allaah’s Arsh, Mentioning His purity”.

Hadith No:6 for Ayatul Kursi
Hadhrat Anas (ra) said that Nabi (saw) said: “The one who recites Ayatul Kursi after every fard Salaat will be protected until the next Salaat and this is constantly done by a Nabi or a Siddiq or a martyr. 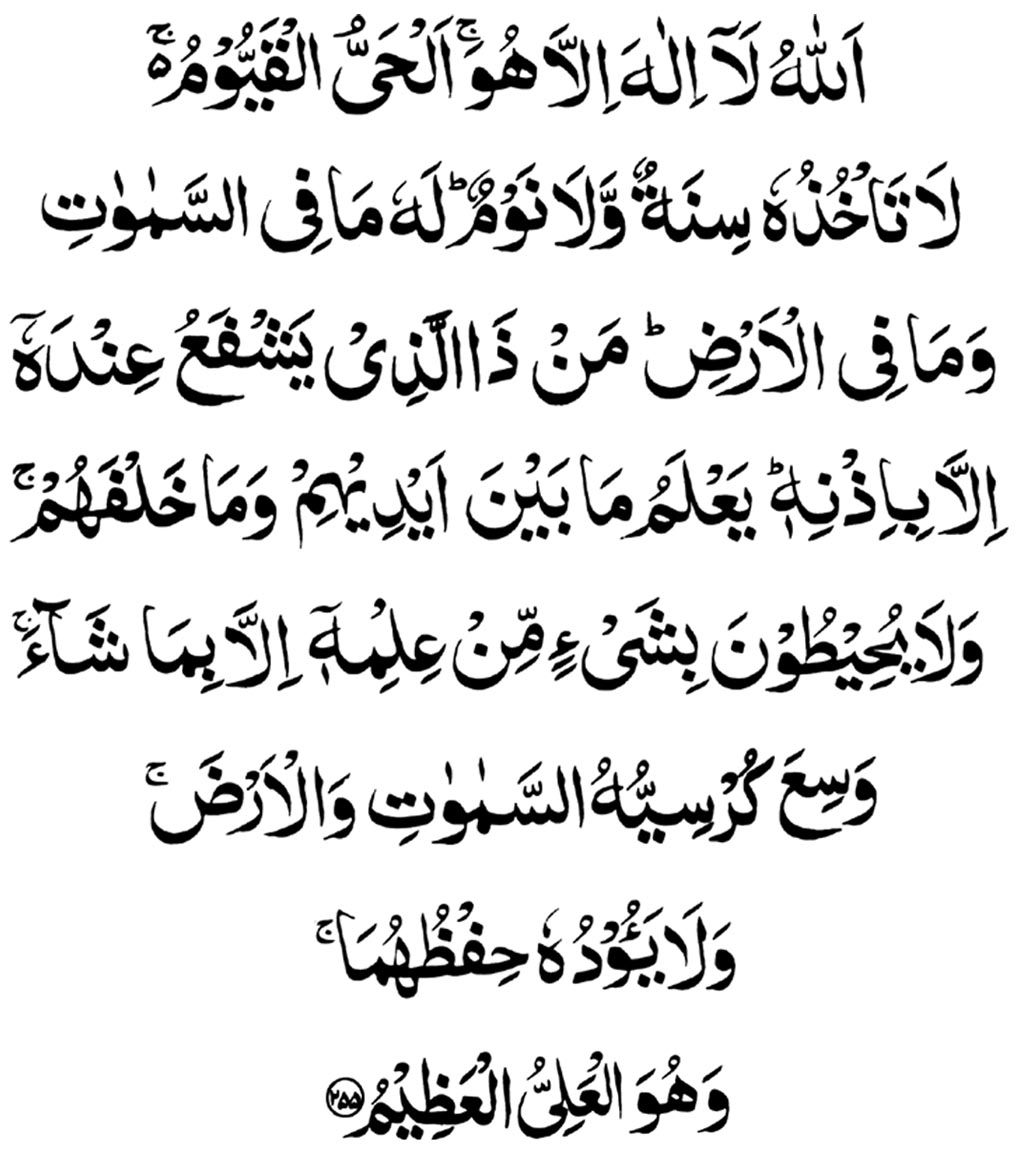 Ayat Al Kursi in English Translation:Allah! There is no ilah (deity worthy of worship) but He The Living, The Eternal One. Neither slumber, nor sleep overtakes Him. To Him belonges whatever is in the Heavens and on the earth. Who is he that can intercede with Him but by His permission? He knows what is before and what is behind them. They encompass nothing of His knowledge which He will. His Throne extends over the Heavens and the Earth, and the preservation of both does not weary Him. He is the Exalted The Immense One.